24 Booked in for this popular match with most people glad to get out of the house after Christmas. For the first time the match was open to anyone and attendance on the day was made up of 14 Clevedon members and a mix of SW Over 55's and the odd one from here and there.
Based on the lake form from the week before it was expected to be hard especially with a hard frost and a bright sky. 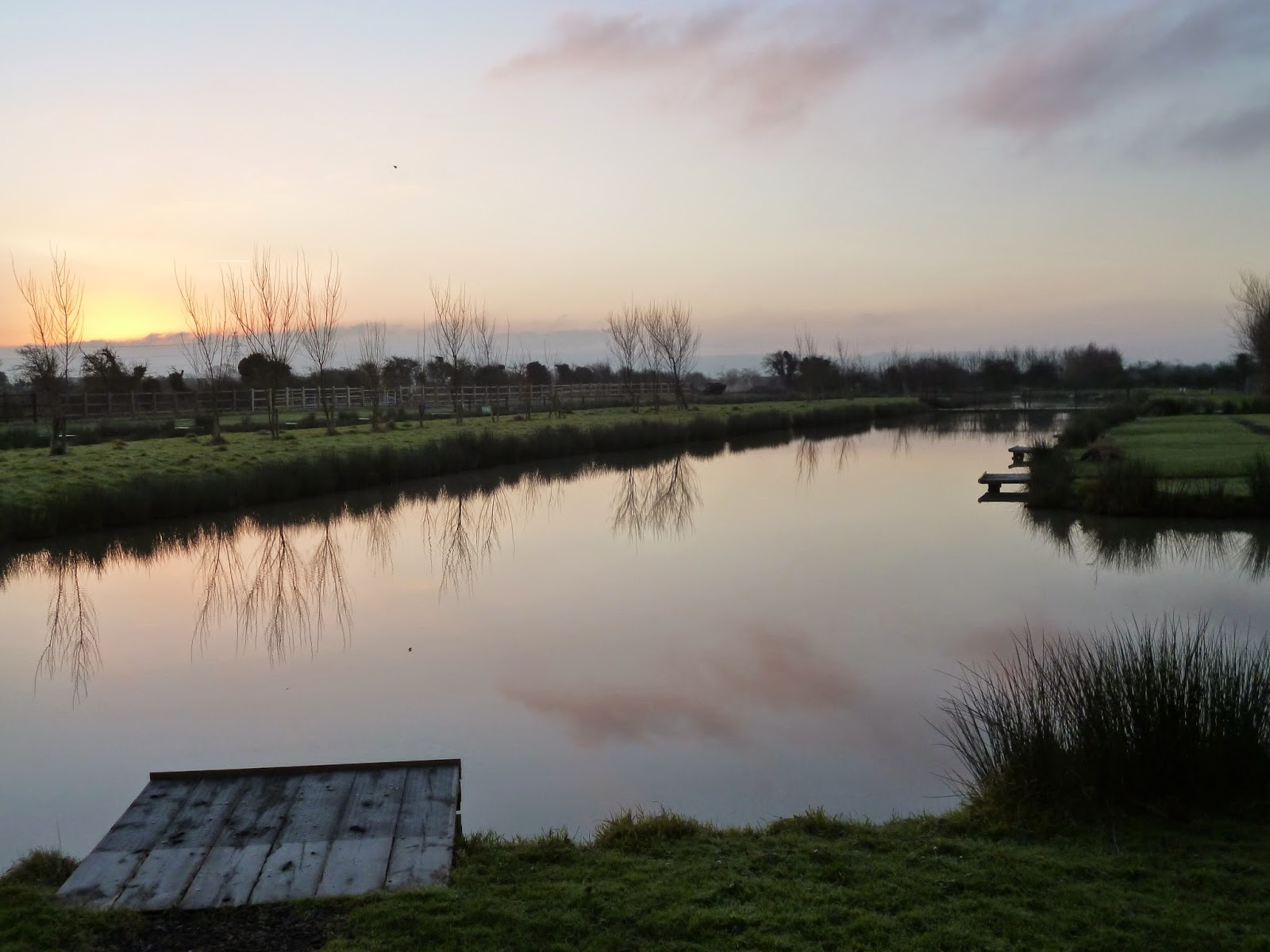 After a bit of faffing around the pegs were sorted, ping pong ball 6 had a dent in it so was taken out and replaced by 2, 2 being the new 6! Some registered their draw some did not, I checked and was paired up with John Page, John drew 37 and I was on 18, not a good draw. Last weeks Christmas winner Mark Walsh was to my left on peg 21 (another bridge peg!) and Mike Owens was immediately to my right on 19. I had plenty of room but it did not matter in the end. 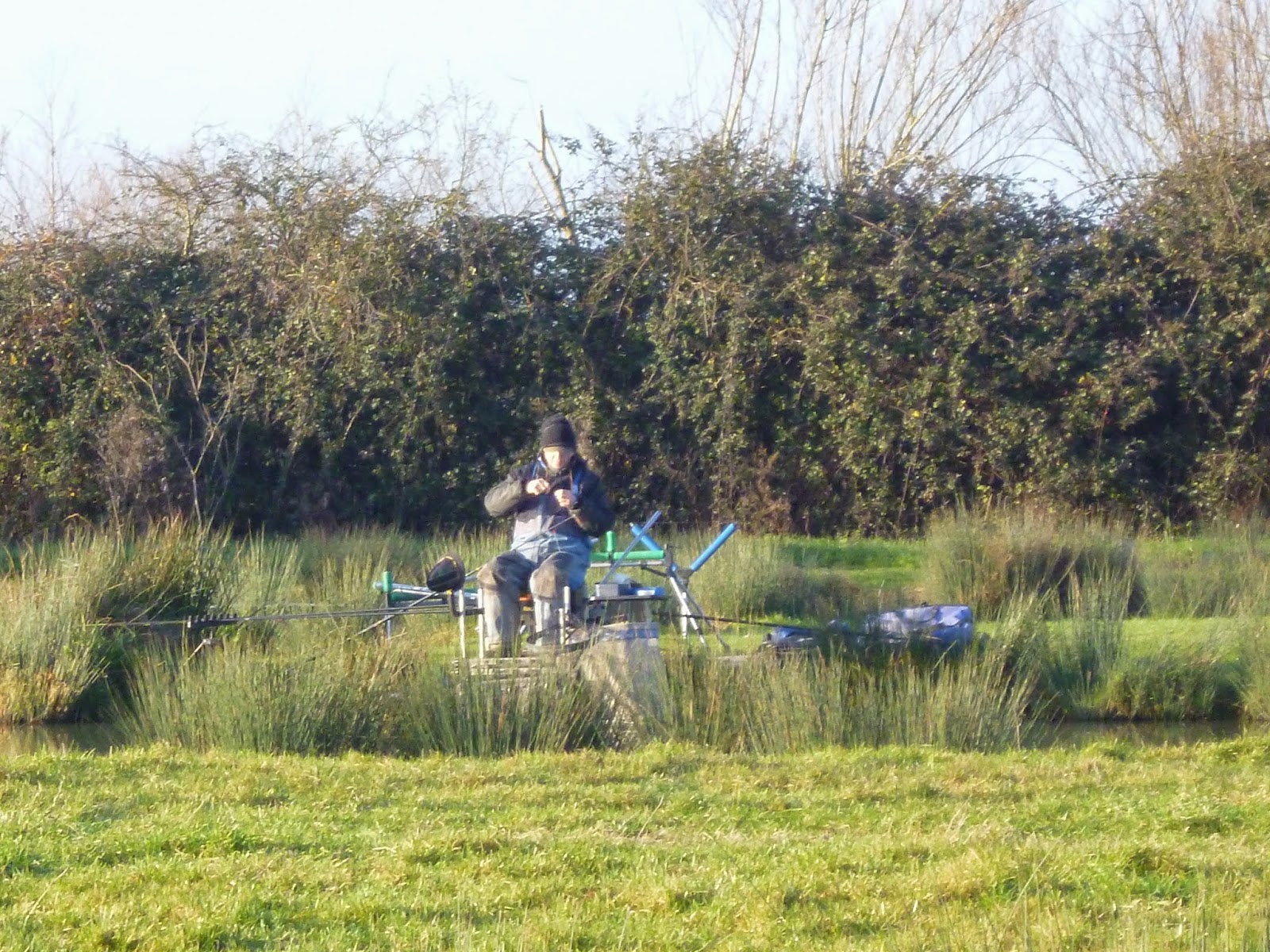 Partner John Page setting up across on peg 37

I started off on the bread punch across just off the far shelf and had a couple of dips but no take, Mike next to me had a foul hooker first put in but it didn't stay on. After 20 mins still searching with the bread across I had a carp on but the way the float slid away I knew it was foul hooked needless to say it was only a brief bit of excitment. Looking around not much was happening, Simon Ryell on 15 was also not doing any good but he did keep warm after getting some pussy. 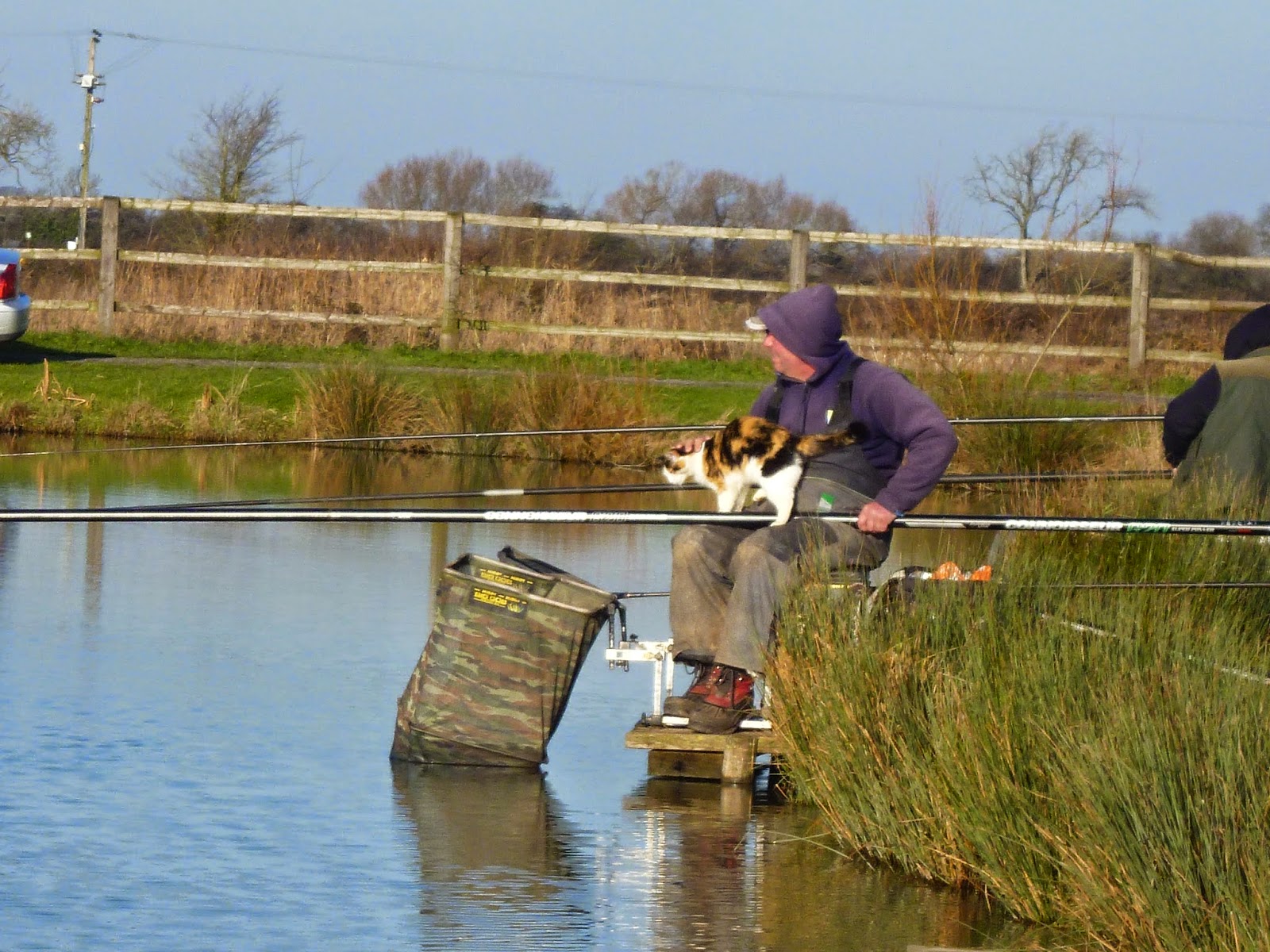 Simon and his furry friend

I could see Club Chairman Steve Bonwick getting a few fish up on peg 12 and Mark Walsh and Mike Chapman had some either side of the bridge other than that it was very very slow.
I took a small skimmer from the middle (foul hooked) for 10oz, Mike next to me had a perch for 9oz, Simon and the cat had 2 carp for 3lb 8oz, Mark on the bridge peg had 13lb 4oz.

Walking round watch part of the weigh in I got this pic of Dave Stephenson with his catch of 30lb plus. 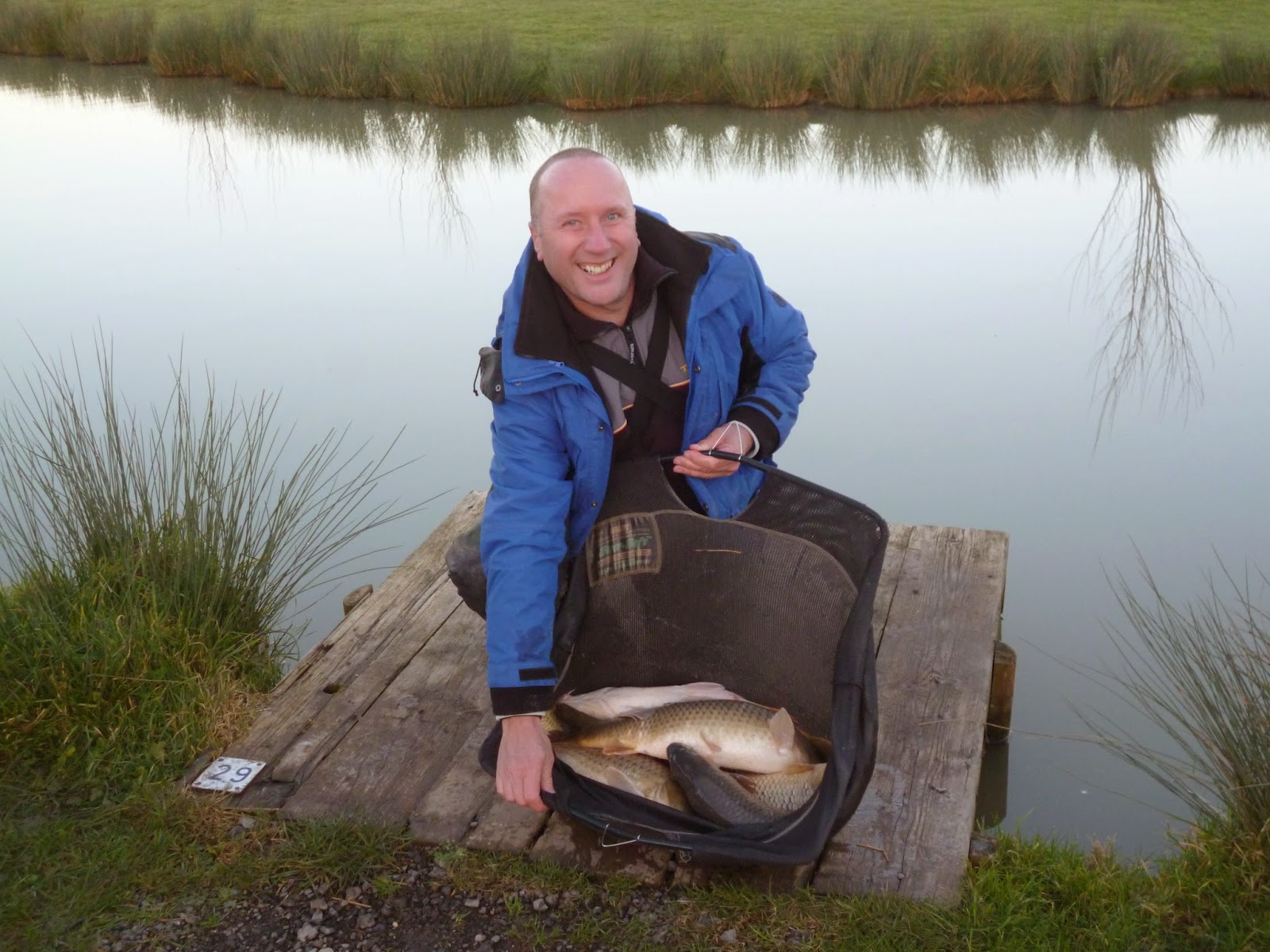 Dave Stephenson 33lb 8oz
﻿
There were two weigh boards, one was all over the place so did not hang around for them to be sorted out as John and I had no chance, John weighed 11lb 14oz. Match Secretary Adie Baker sent me the results.

Next up for me is the 5th Round of the Commercial House League this coming Sunday on the K & A Canal at Bath.﻿
Posted by Ivan Currie at 10:20 2 comments:

Email ThisBlogThis!Share to TwitterShare to FacebookShare to Pinterest
Labels: Acorn

This is a very well organised Match and well supported. Attendance was even better this year due to it being opened up to non members and the SW Disabled and Over 55's invited to fish. 32 booked in and to be honest is more than enough on this 40 peg match lake. It was 8 degrees when I left home at 7.30 with some very light rain, forecast was overcast most of the day with a chance of light rain. Breakfast was available in the on site Cafe, the results and prize giving was to be held in the Bridge Inn Yatton a 5 minute drive away.
It was good to see some faces that you do not normally see all year and who do not fish the Club matches.
Draw was held at 9 o'clock sharp, I was about half way in the que and when it came to my turn out came ping pong ball number 10, happy with this even though I have never fished this end of the lake.
A short walk today as I had more or less parked the car behind the peg anyway. Peg 9 to my right was taken by Match Secretary Adie Baker, Peg 11 was also in and taken by a SW D and over 55 angler so not a lot of room, the far shelf was a comfortable 11 meters across. 3 rigs set up for bottom of far shelf, middle and edge. Maggot, dead and alive, pinkie, soft pellet and micro on the bait table along with some bread. 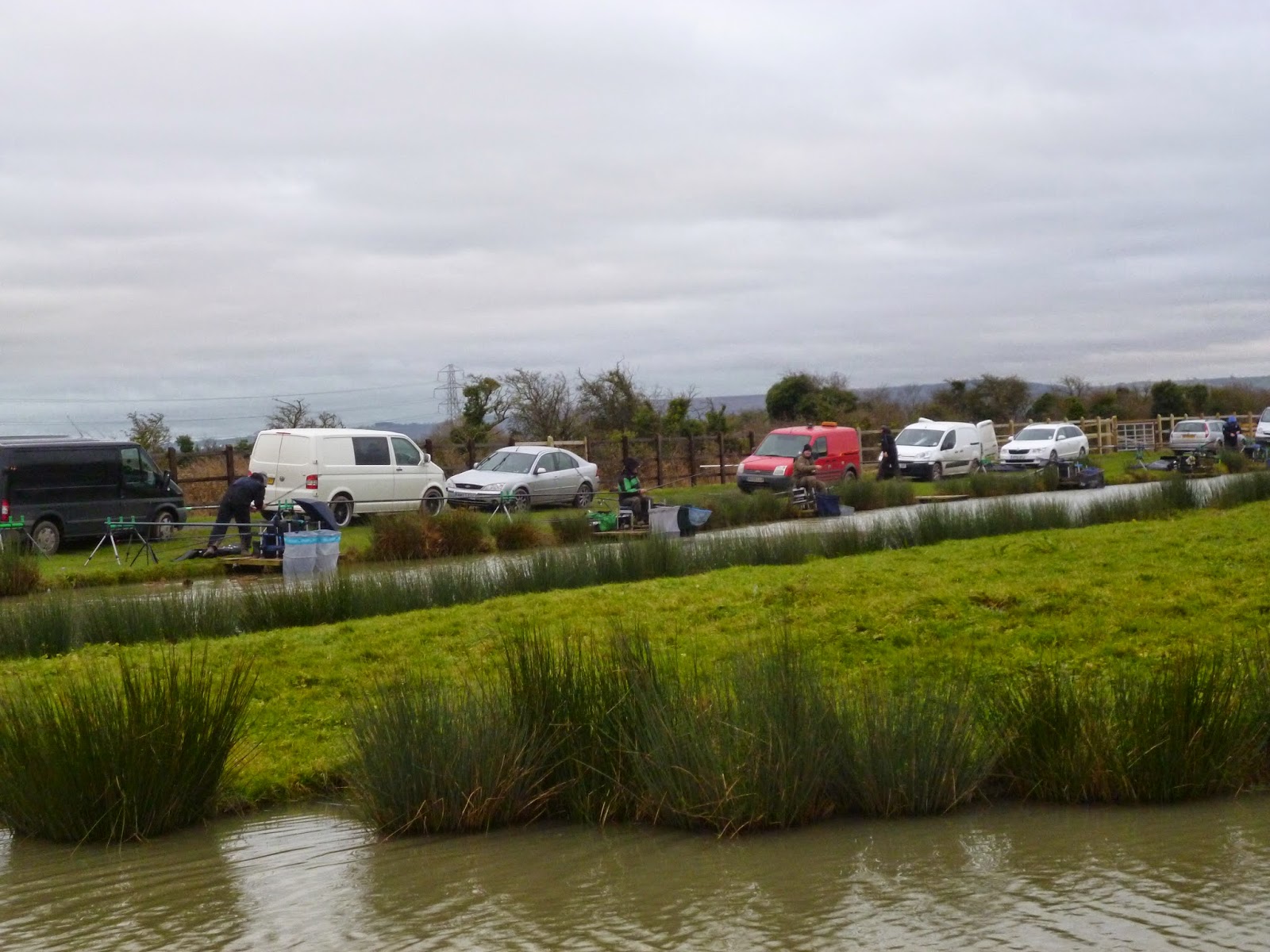 every peg in down the left bank 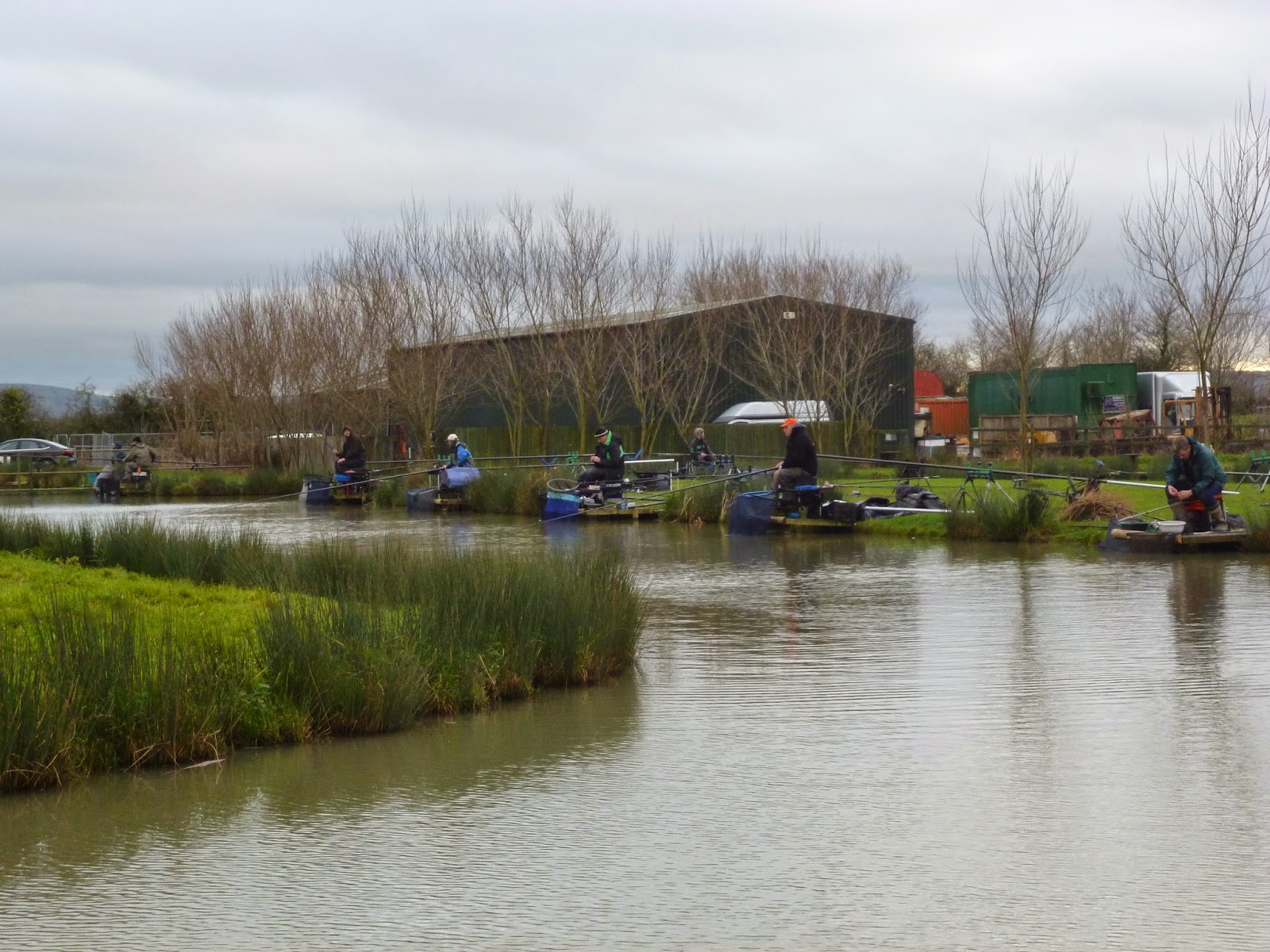 island was full as well

Plumbing up I felt a couple of fish which was encouraging, Adie had the same experience.
On the whistle﻿ I fed the left hand margin and the far shelf with a little micro and dead read and cupped in some liqqy in the middle. The middle was where I started with a piece of 6mm punch, I did expect a bite straight away but it did not happen, after about 30 mins I had a couple of small dips but that was it. Nothing was being caught as far as I could see.A look across resulted in a foul hooker that jumped out of the water and came off, Adie also lost a few foul hookers in a row, The peg did not come alive at all and all I had was 2 roach and 2 see through perch. I got bored but picked up the camera and captured Adie in action. 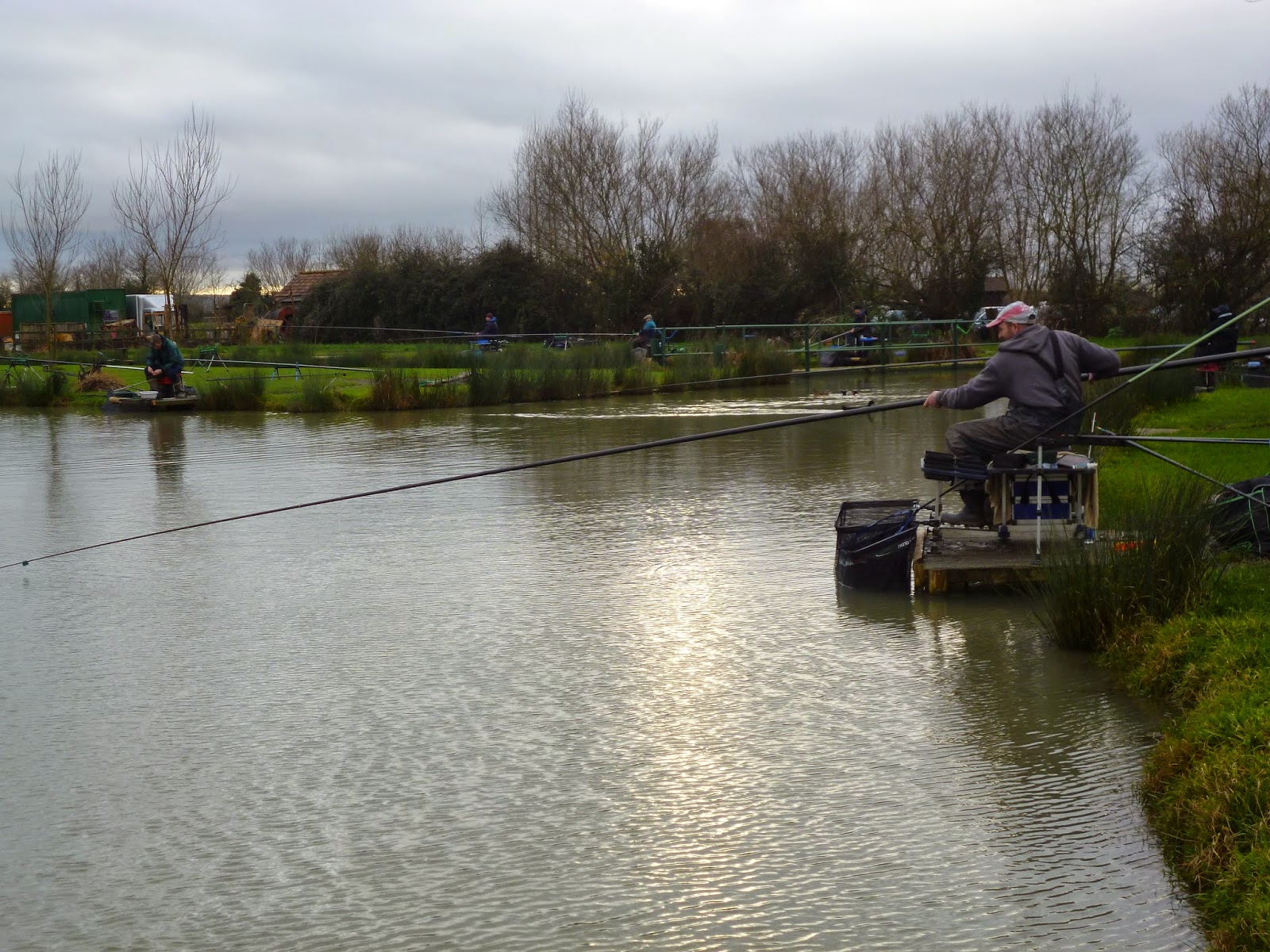 fish on but nervous as already lost a couple 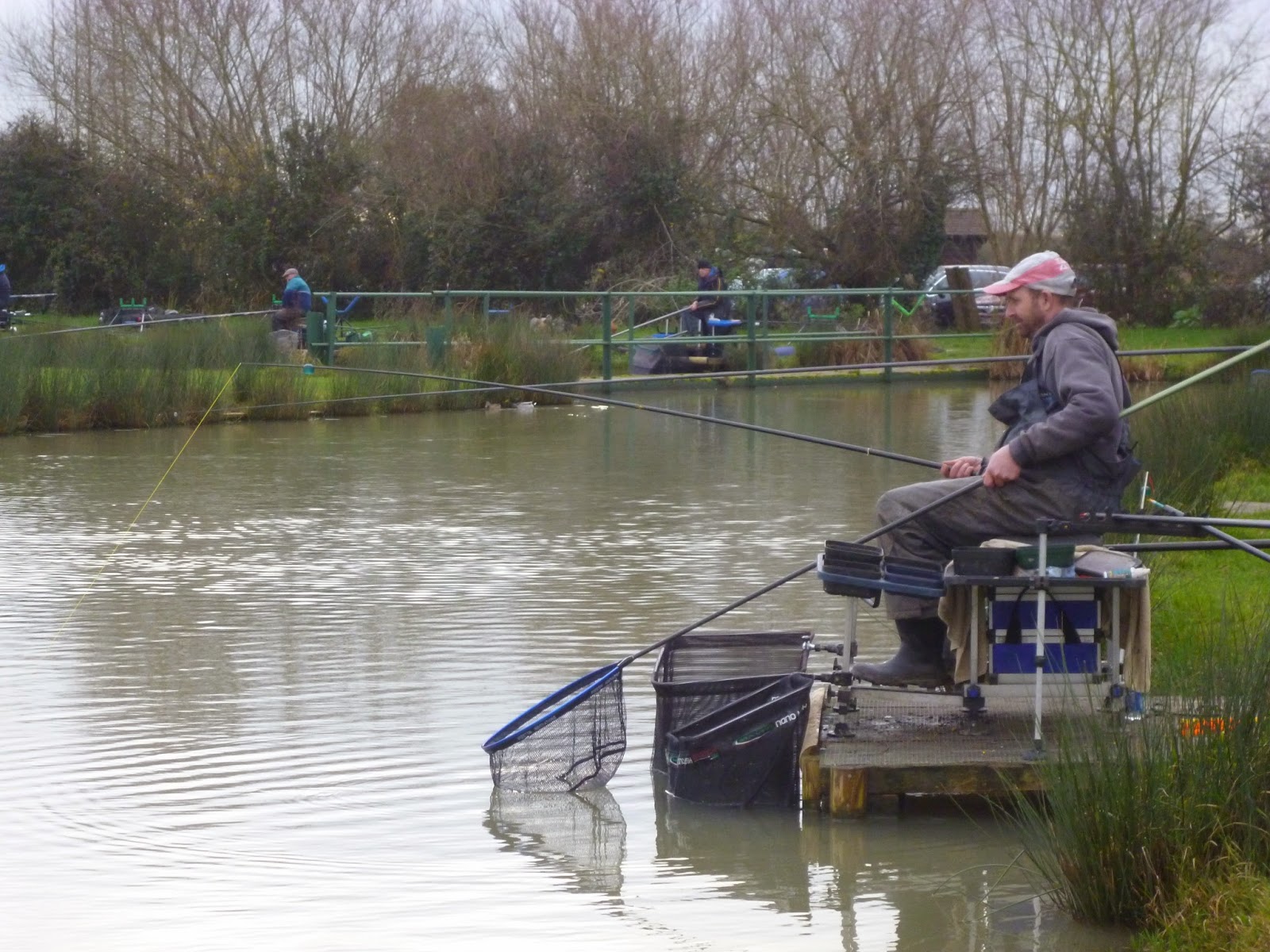 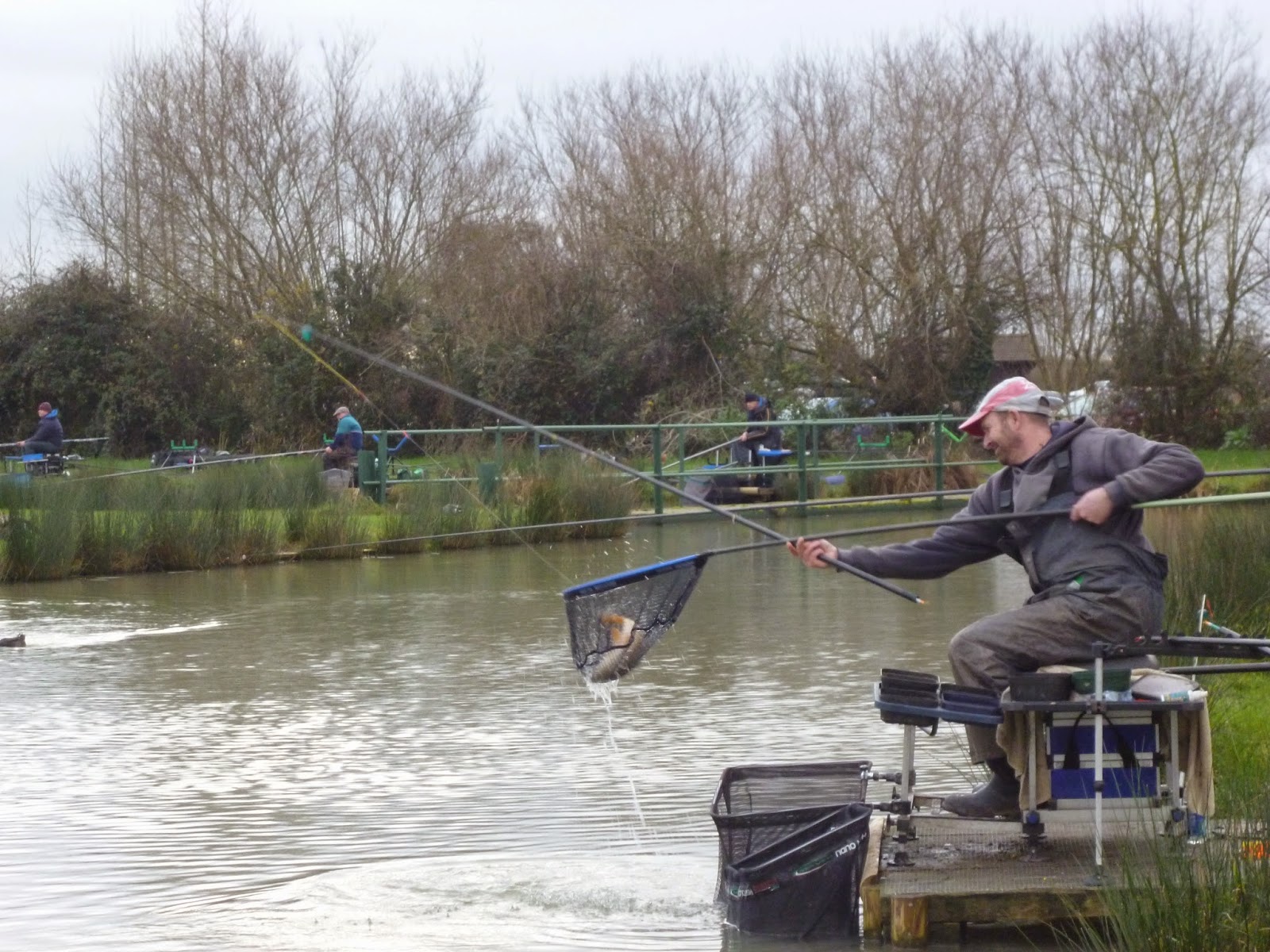 Although Adie lost a few fish he picked up the odd one now and then and I thought he would be there or there abouts. At the weigh in he had 23lb 5oz, I had 4oz! disaster but apparent 4 blanked.
Back at the Bridge Inn I met up with Mark Walsh, venue expert and angling fashion icon. What did you weigh Mark... just over 30lbs was the reply. Turns out he had a practice the day before and he drew a bridge peg.
Here is Mark with his catch (thanks for the photo Scott). 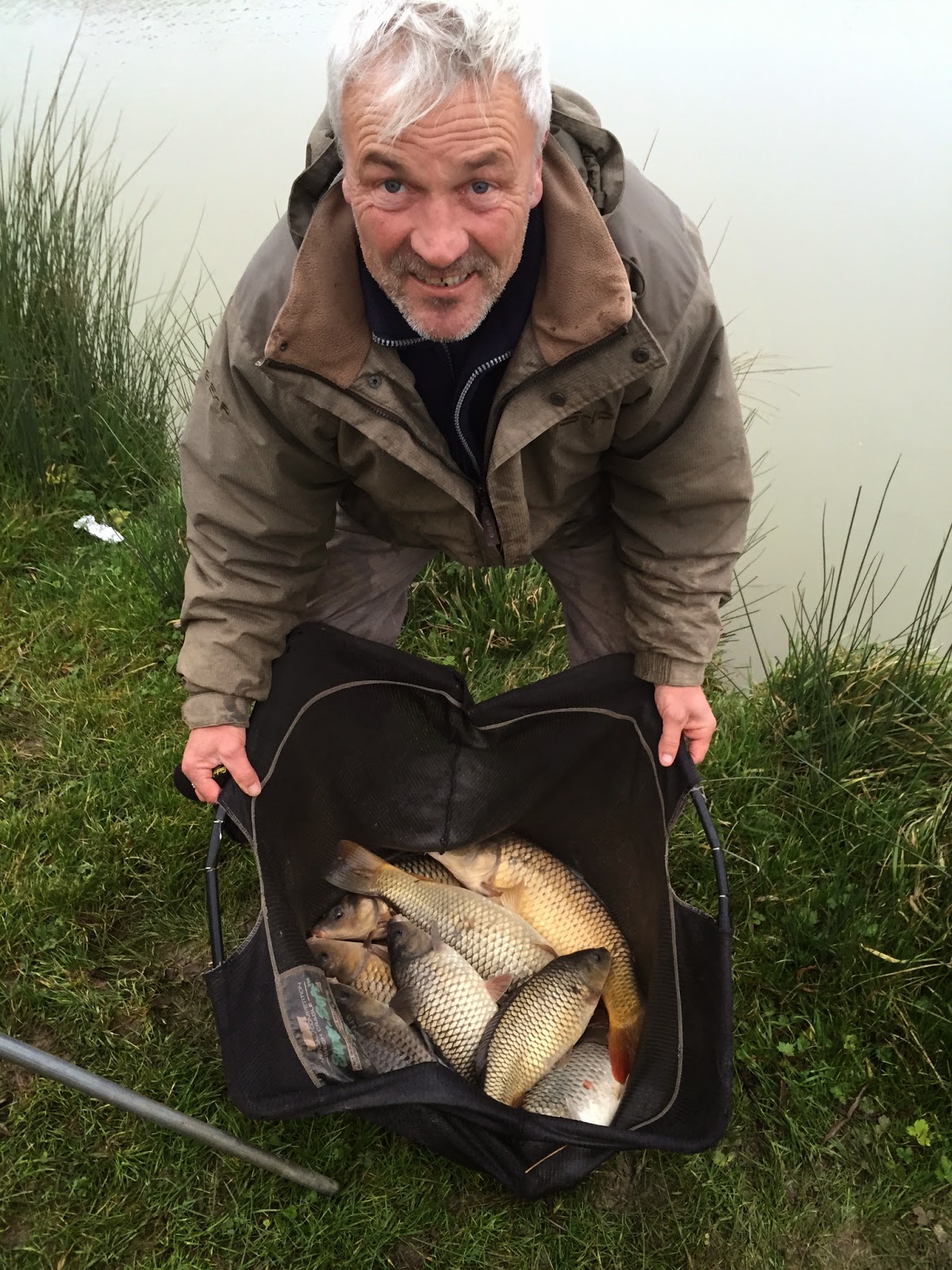 not big carp but they all count

Overall results were as follows:

Here is Mark celebrating his win, he also won some good raffle prizes which brought the usual level of abuse directed towards him, Did he care! 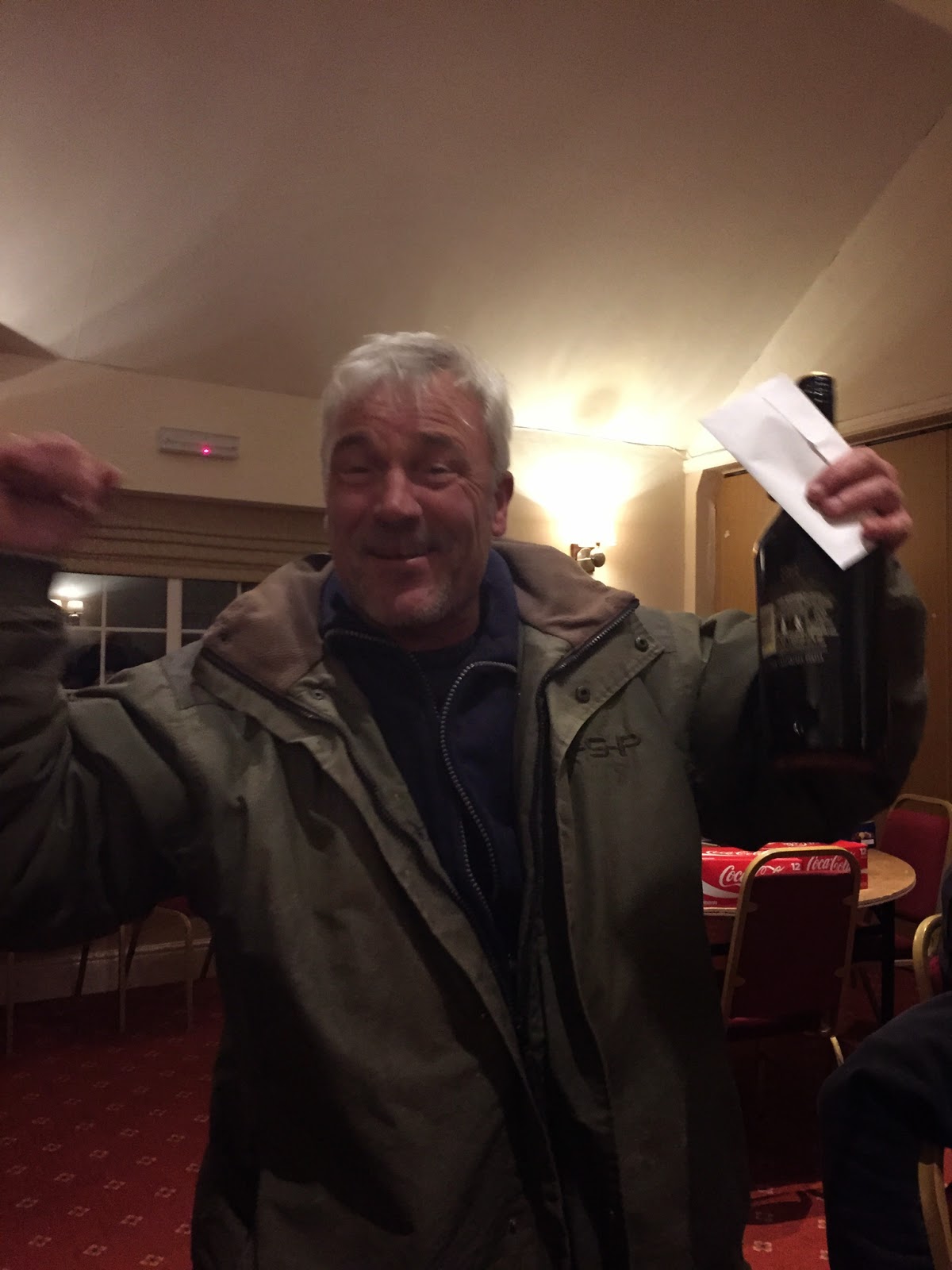 man of the match and raffle

As if this match wasn't enough I am going back again as we have our Boxing Day Pairs match on Sunday 28th, must have had a senior moment. 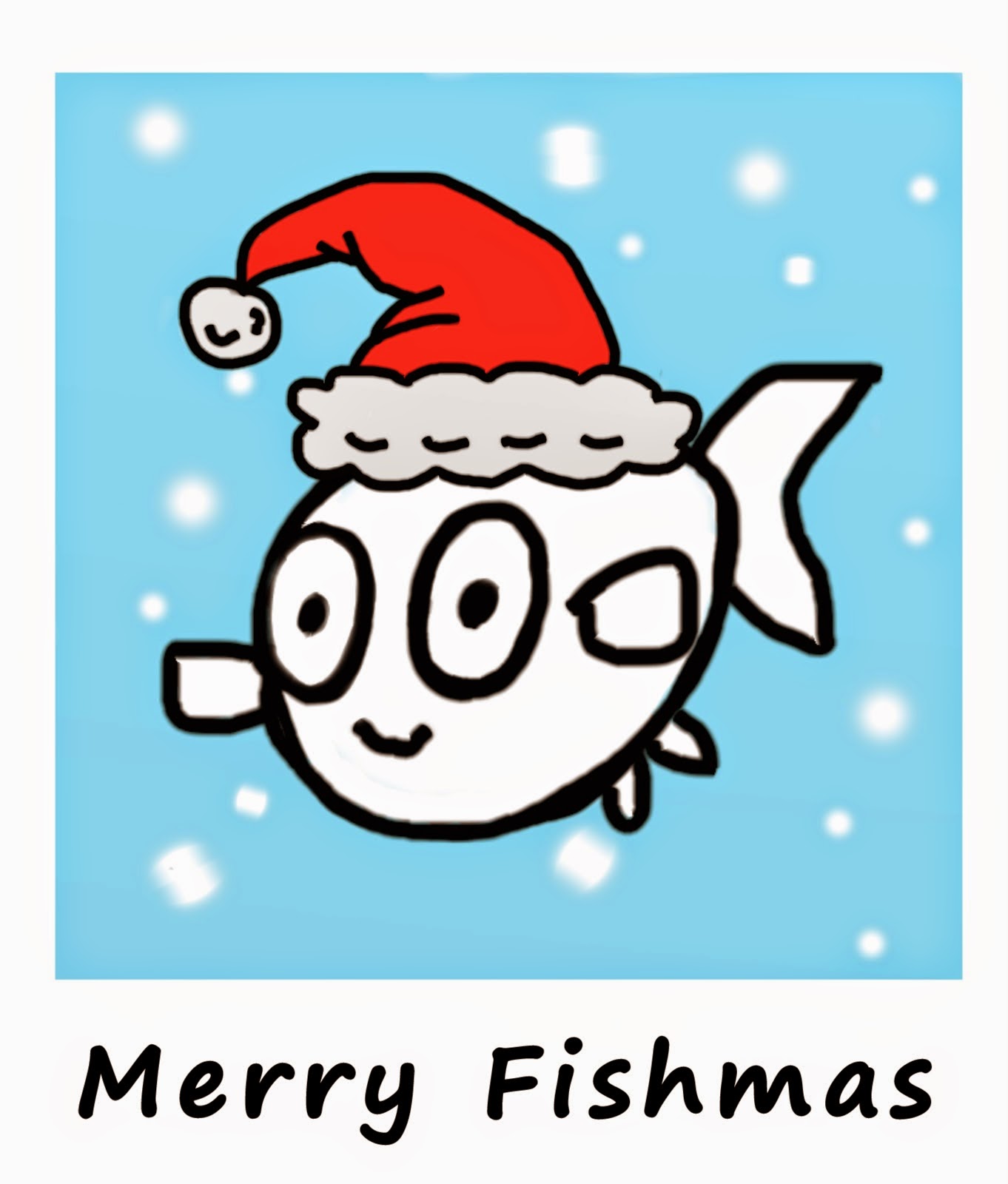 Email ThisBlogThis!Share to TwitterShare to FacebookShare to Pinterest
Labels: Acorn

The Team had registered for this League but this was the first time I was asked to fish. It's a new League this year made up of 8 Teams of 4, venues have been the King Sedgemoor Drain, Bridgwater and Taunton Canal and the River Parrot as well as this one on the Tone. I have never fished the Tone before and only seen it if driving down the M5 or through Taunton town itself. Team captain Chris Hook had never fished it either but the word was big chub with some roach, dace, grayling and trout were plentiful.
Draw was, 8 o'clock in the B&Q Car Park. Sat Nav took me into the right area but spent a few minutes trying to find B&Q. On arrival a catering truck was parked up doing breakfast rolls etc, I think he thought he had won the lottery as he could not keep up with orders and even gave up charging for tea and coffee. It was almost like the old days surrounded by hardened river anglers and a draw out in the open.
Section locations were explained but to be honest it might have well dekivered by a non english speaking china man.
I drew D Section and it was split, 4 pegs either side of McDonalds with a good gap inbetween. The section was only a short drive away and was fairly easy to find. In my part of D Section I had Riverfest Qualifier Roy Carter and Senas Thyers Captain Lance Tucker the other angler was from local team Amigo's.
The walk to the peg was easy and through a small copse, the river was pacy but I did have a long trot. 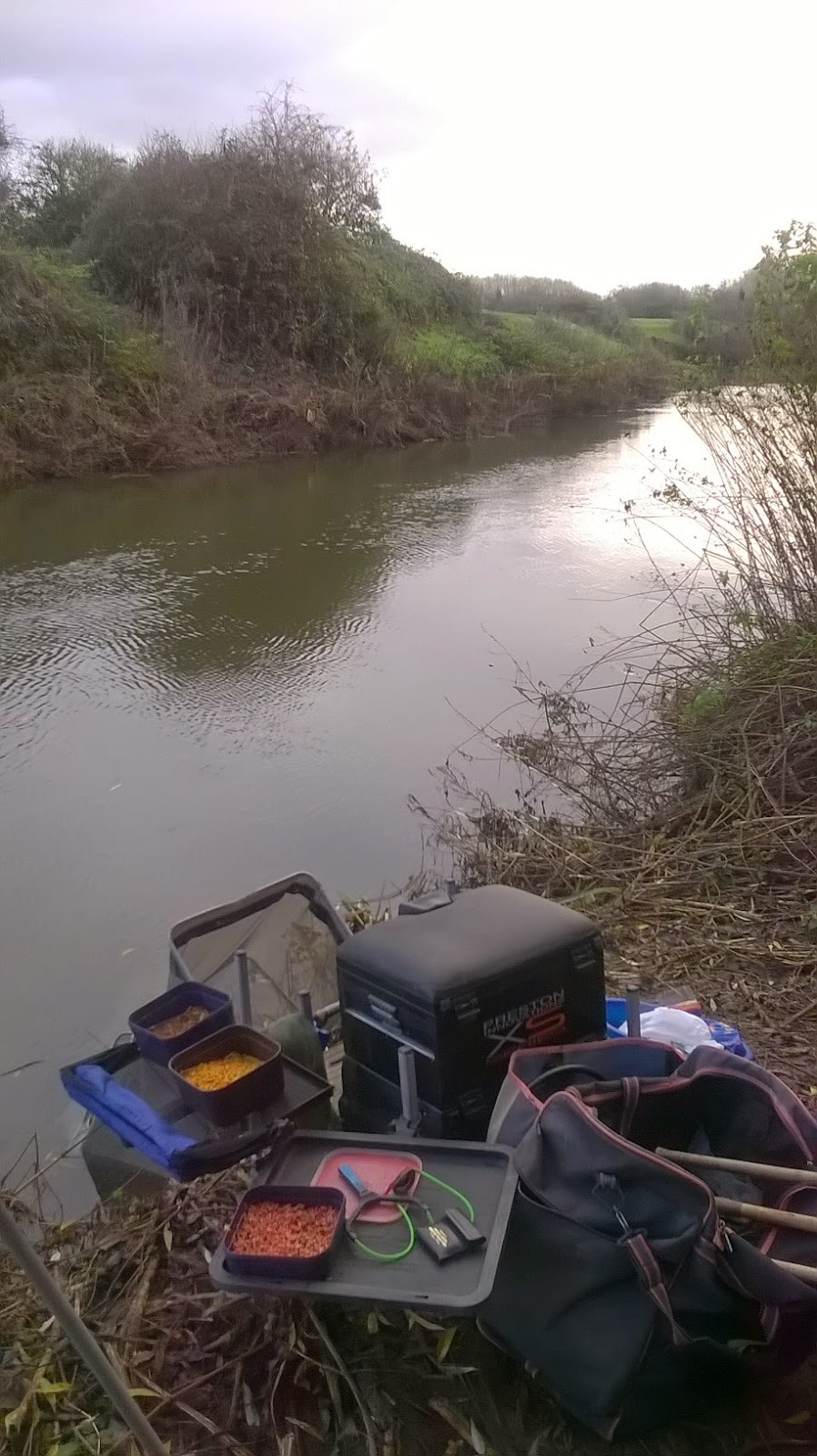 My office for the day

Set up was a light feeder rod as I was thinking of a bread attack but never used it all day, I also set up a 2BB stick for the inside line but never used this either. The rig I used all day was a 4BB wire stemed avon trotter, 4BB as bulk and No. 8 dropper, hooklength was 0.10 to a drennan wide gape 18. I had 1pint of caster and 2 pints of bronze﻿. Depth down the middle was 3' max and about 6'' less down the edge and far side.
At the all in I catapulted about 20 bronze down the middle and fed some caster down the inside. First trot down I had a small roach and this continued for about 20 mins. A look down the inside and with the float held back hard a small graying came to the net. I started feeding a bit heavier down the middle and it did bring a better stamp of roach and a couple of 8oz chub. The wind kept changing which made presentation difficult and on reflection I should have put on a heavier stick float...but... I had bites most of the day and thoroughly enjoyed the 5 hours. I had no idea how anyone else was doing.
Roy Carter came down with the scales and said he did not have that much, when he saw my net he said it would probably be the best up this end of the section. My weight was 5 kilo 300 grms (11lb in old money) and was the best at my end of the section. 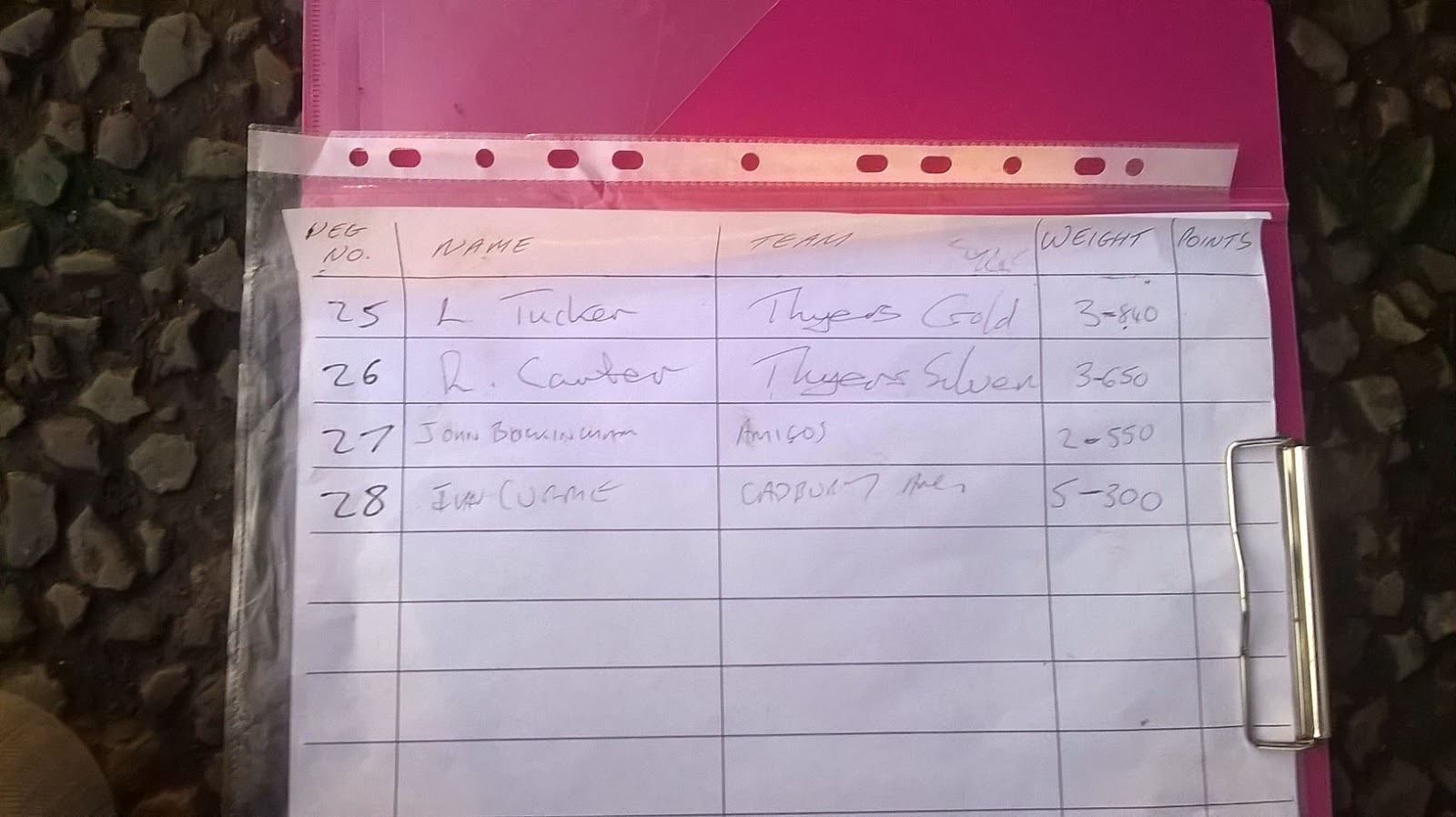 Weights were slightly better downstream and I ended up 3rd in the section overall but somehow managed to pick up £10.
Team Captain Chris Hook won the match with over 11 kilo made up of decent chub, as a Team we came 4th on the day. I must go back to the Tone again.

Next up is the Clevedon Christmas Match this weekend on the Paddock Lake at Acorn (our own fishery).

Ivan Currie
To say I love angling is an understatement. I guess being brought up within site of the River Bann in N.Ireland meant it was always to be my chosen sport. I remember the roach explosion (along with many other explosions) on the Bann, it was transformed overnight and in turn saw many top english anglers like Ian Heaps, Kevin Ashurst and Kenny Collins to name but a few fishing the popular spring matches around Portadown that saw huge nets of roach and bream more than satisfy the visiting anglers. I left N.Ireland in 1974 and joined the Royal Navy serving in submarines (had to get closer to the fish) until 1978, I settled in Bristol and have been happily married to Julie for 41 years. On leaving the Navy I became a Postman and immediately joined the Bristol PO Angling Club and performed the role of Secretary for 15 years, during this time and beyond I was the Treasurer of the Bristol and West of England Anglers Federation. I have been a member of Clevedon and District Freshwater Angling Club since 2008, in January 2018 I became the Secretary. I fish various Leagues in the West of England. I am a member of Sensas Nomads Match Team.